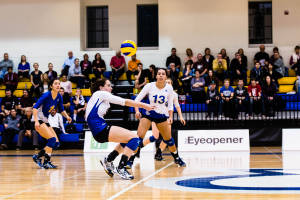 TORONTO – One day after being swept on their home court, the Ryerson Rams decided to return the favour against their Sunday afternoon opponent, the Nipissing Lakers, winning in straight sets (25-18, 25-16, 25-15).

It was all Ryerson (3-1) from the early going with Chelsea Jensen (Georgetown, Ont.) returning to her normal position of outside hitter and tallying five kills in the first set. Jensen has been mostly playing at libero for the Rams to start the 2013-14 OUA regular season.

Emily Nicholishen (Whitby, Ont.) was the story of the second set. Nicholishen matched her four kills from the first set,for four more in the second to lead all Rams attackers. She ended the game with nine kills and is now tied for fourth in the OUA with 44.

The third and final set gave head coach Dustin Reid an opportunity to play some players that normally wouldn’t get as much playing time.

One of the players that stood out for Reid was Ryanne Hollies (Calgary, Alta.), who set the entire game for the Rams. Hollies finished the game with 37 assists and added a pair of kills.

Reid was pleased with what he saw from his third-year player along with sophomore middle, Meghan Pratt (Bolton, Ont.)

“Ryanne (Hollies) played the whole game and set great, I’m really happy to see her performing that way,” said Reid. “Meghan Pratt, every time she steps on the floor she plays great and today was no exception.”

With four games under their belt, that’s enough time for Reid and his coaching staff to do some reflecting on their play so far this season.

“We’re playing really well in certain phases. I think our blocking, our defence and how we work together needs to improve still. We’re quite ambitious with what we want to do there,” said Reid.

– The win moves Ryerson into sole possession of second place in the OUA East standings with six points.

– Ryerson will go on the road on Friday, Nov. 1 to play the Guelph Gryphons (2-1) before returning home the next day to play the Lakehead Thunderwolves.