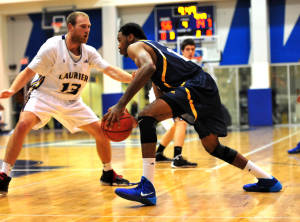 This article first appeared on RyersonRams.ca on June 9, 2014. TORONTO – The Ryerson Rams men’s and women’s basketball teams released their 2014-15 OUA regular season schedule on Monday with both teams starting their campaigns on the road on Wednesday, Nov. 5 at the Waterloo Warriors. In May, the OUA released a division realignment and new …

END_OF_DOCUMENT_TOKEN_TO_BE_REPLACED

This article first appeared on RyersonRams.ca on Feb. 1, 2014. Link: http://www.ryersonrams.ca/ViewArticle.dbml?DB_LANG=C&DB_OEM_ID=22300&ATCLID=209392478 TORONTO — For the majority of 33 minutes, the No. 5 Ryerson Rams were leading the No. 1 Carleton Ravens, and it was an upset in the making. BOXSCORE But then it was the Ravens who showed why they are now 18-0 on the season, …

END_OF_DOCUMENT_TOKEN_TO_BE_REPLACED

This article first appeared on RyersonRams.ca on Nov. 10, 2013 Link: http://www.ryersonrams.ca/ViewArticle.dbml?DB_LANG=C&DB_OEM_ID=22300&ATCLID=209304023   TORONTO – The No. 6 Ryerson Rams put up 28 points in the fourth quarter on Saturday night, defeating the Laurier Golden Hawks 84-70 at Coca-Cola Court. BOXSCORE Ryerson started off by making several shots, while Laurier on the other hand missed a lot …

END_OF_DOCUMENT_TOKEN_TO_BE_REPLACED 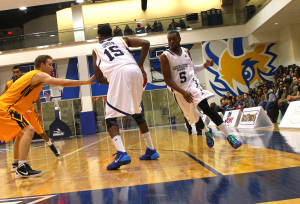 This article first appeared on RyersonRams.ca on Nov. 8, 2013 Link: http://www.ryersonrams.ca/ViewArticle.dbml?DB_LANG=C&DB_OEM_ID=22300&ATCLID=209302969   TORONTO – It was all Ryerson from the start and they never looked back, dropping the Waterloo Warriors 75-47 on Friday night during their home opener. BOXSCORE At Coca-Cola Court and in front of a loud and energetic crowd, the Rams started the game …

END_OF_DOCUMENT_TOKEN_TO_BE_REPLACED 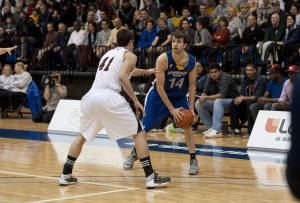 A weekend of fast-paced, exciting and aggressive basketball showed the Ryerson Rams basketball teams where they stood going into the second half of the season. more »

As the clock hit zero, the Eastern Commerce Collegiate Institute Saints men’s basketball team walked off the court at the Mattamy Athletic Centre at the Gardens having lost their first game of the season. A 61-54 exhibition loss against rival Father Henry Carr was overshadowed by who could have made the difference. The Saints were without their all-star, 6’6” point guard, Justin Jackson, 15, a member of the Canada Basketball cadet program that contains the top 12 players in Canada under the age of 17. more »

As the Eastern Commerce men’s basketball Saints look to capture another provincial title in 2012-13, academics may stand in their way. more »

This article first appearing on RyersonRams.ca on September 7, 2012 by: Ryan McKenna TORONTO – Early and often was the theme for the Ryerson Rams men’s basketball team tonight as they defeated the Dawson College Blues 99-42 during the grand opening weekend festivities at the Mattamy Athletic Centre. The game, which was played at Coca-Cola …