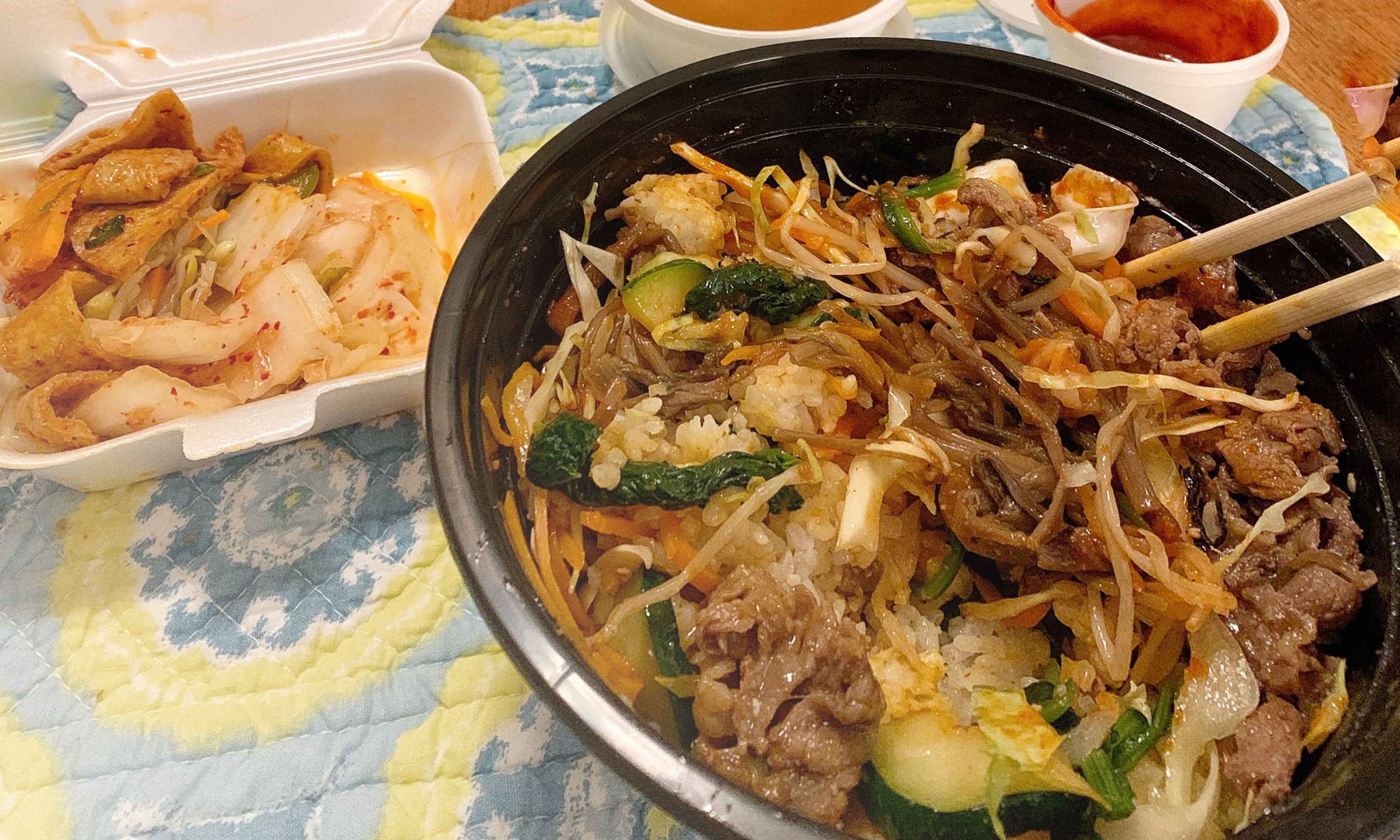 Tonight, I’m thankful for the food on my placemat.

As I was biking back to my new Toronto neighbourhood in Little Italy on Thursday, I was feeling like some Asian food for dinner. I took my time looking around at all the different options and seeing what was available. I eventually got back to my street, looked around, and thought, “I should give Korean Village Restaurant a try again.”

It turned out to be the right call.

My relationship with this restaurant and the Korean culture all started in January 2018.

Growing up on PEI, there was limited access to Korean cuisine, unlike in Toronto. Even living here since 2011, I hadn’t tried it as much until three years ago.

I was working for The Canadian Press’s sports department at the time and my editor, Julie Scott, asked if I would go do a story on Canada’s Korean scene ahead of the Pyeongchang Olympics the following month. It sounded like a fun assignment.

I put out some phone calls to different business owners before going to explore for the first time. It was a Wednesday afternoon and when I got there, I felt lost. Many of the signs were in a different language and several store owners didn’t speak English.

Fortunately, a friend put me in touch with someone she knew that was Korean and had lived in South Korea. Ray Jin was his name and after I told him about the story I was working on, he very graciously offered to come with me on my next time through the area.

A few days later, with Ray translating and me asking the questions, it was a lot more successful of a trip than the first go around. Ray introduced me to some authentic food, gave me some interesting tid bits about the culture and it was overall a better experience.

Shortly after that visit, Jason Lee, the business area improvement chairman for Koreatown, returned my call and invited me back to get a guided tour. I happily obliged.

I went there around 6:30 p.m. on a Thursday and Jason showed me all around the strip that runs west on Bloor St. from Bathurst to Christie Streets. From the Korean supermarket to the delicacy shop that sells speciality walnuts and then back to the restaurant that he helped run with his mom — Korean Village Restaurant — I met some of the most important people in the area.

Sitting down in Jason’s restaurant was such a fun experience for me and the first time I had ever experienced authentic Korean BBQ. Jason was the one that introduced me to all the side dishes that come with meals in Korean cuisine and how to properly put your BBQ into a lettuce wrap.

The story itself got good play in publications such as The Toronto Star and Toronto Sun, to name a few. For me, it was a fun story that set me up for success when I went to South Korea later that year with my girlfriend and close friend. I knew more about the culture than I ever would have had I not done that story. It was amazing to walk through the streets of Seoul and relate it back to the experience of being in Toronto’s Koreatown.

Fast forward almost three years later to my impulse decision to stop by Korean Village Restaurant on this cool, late October night, in the middle of the COVID-19 pandemic. I looked at the menu on the store’s window and it was completely different than I had seen it before in person. I went in and quickly ordered a bibimbap and was told it would be under 10 minutes until my order was ready.

The quick turnaround resulted in just lounging around outside the store and peering in to pass the time. It took me back to that night in January 2018 when the restaurant was flooded with people on a night out, enjoying authentic, premium Korean food and having a good time. Instead, this time, all the tables were empty due to current dine-in restrictions with just a few workers around to help with orders.

“Hey, I recognize you. I did a story with you a couple years back when I was with The Canadian Press ahead of the Olympics!”

Jason’s face immediately brightened up.We stood there for the next 15 minutes and talked about the last few years and how much has changed for both of us.

For Jason, he told me his mom, Ok Re Lee, died last year. When I visited the restaurant in 2018, despite her age, she was the one running the show — that much I won’t forget. You could tell by the pictures on the wall throughout the restaurant that Ok Re was the reason her restaurant was so well known and successful. She made sure everything was right, and delicious.

It was tough to see the struggle Jason and his family have been going through the last several months because of the pandemic and it really put a lot of things into perspective. Jason said he’s glad his mother wasn’t here to experience the difficulties that COVID has caused. He’s had to lay off 40 staff members because of the pandemic, some of whom have been there almost as long as the restaurant’s 42-year existence. Jason isn’t even sure if his store will be around two months from now.

I could tell how much he appreciated the fact that I learned so much from he and his family on that cold winter night in 2018. Tears swelled up in his eyes as I recounted those stories and interviewing him about both Koreatown and his restaurant. So much has changed in 2020, but one thing that remains is the human element to all of us. My time as a journalist was all about those simple interactions on a daily basis. Very rarely during an interview do you pause to consider what the experience will mean a year, five years or 10 years down the road. In this case, it meant a lot to both of us.

Those are the special interactions that make me thankful for the world we live in. Despite the hardships for many this year, including Jason and his restaurant, the interactions and relationships with others are as meaningful as ever.

I’m so thankful my story from almost three years ago still touches people to this day. And I’m so thankful I decided to stop in to get Korean food on Thursday.