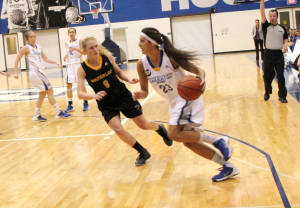 This article first appeared on RyersonRams.ca on Nov. 8, 2013

TORONTO – Keneca Pingue-Giles (Winnipeg, Man.) had a game high 18 points and was a rebound shy from a double-double, leading the Ryerson Rams over the Waterloo Warriors in their home opener, 70-57.

It was exactly the start that the Rams were looking for, scoring 24 points in the first quarter and taking control of the game. At the half, Ryerson led 41-28.

Despite only shooting 29 per cent in the second half, Ryerson was able to hold off the Warriors fourth quarter charge and hang on to win their first game of the OUA regular season. Waterloo outscored Ryerson in the final quarter 19-17.

Mackenzie Lougheed was a big bright spot for Waterloo. In only 23 minutes on the court, Lougheed had a team-high 14 points. Marti Killeen was also solid for the Warriors dropping nine points and collecting 12 boards.

Ryerson’s attack was balanced all night. Not only was Pingue-Giles a key factor in the win but so was Silvana Jez (Kitchener, Ont.) and Annie Sokoloff (North Vancouver, B.C.). Jez has 16 points in 26 minutes while Sokoloff went 6-for-14 from the field with nine boards.

The win puts Ryerson into a tie with Laurentian and York for fourth in the OUA East with a record of 1-2. The loss drops Waterloo to an identical 1-2 record and tied for sixth in the OUA West.

Ryerson is back on the court on Saturday night as they host the Laurier Golden Hawks. Tip-off at Coca-Cola Court is slated for 6 p.m.