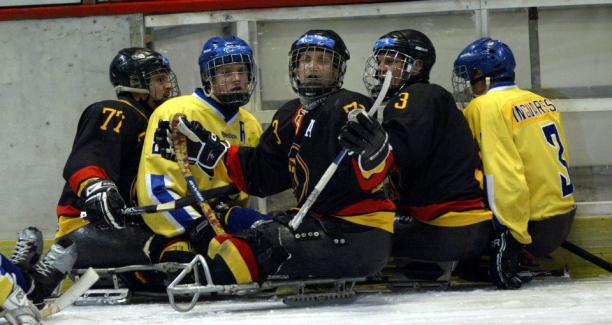 This article first appeared on Paralympic.org on September 18, 2013

“If you ask me, I think Sweden is going to take one of those places along with Italy and South Korea. That is what I believe.”

This was the strong statement given by Swedish forward Peter Ojala when asked what his team’s chances are to capture one of the three remaining ice sledge hockey spots for the Sochi 2014 Paralympic Winter Games, which run from 7-16 March.

In order to attain one of those three remaining spots, Ojala and the newly revamped Sweden team will have to face Italy, South Korea, Germany, Japan and Great Britain at the IPC Ice Sledge Hockey Qualification Tournament in Torino, Italy from 20-26 October.

On 14-15 September in Hamburg, Sweden got a taste of what the competition will be like, as they split a pair of games with Germany, losing the first contest 3-2 in a shootout and winning the second by a score of 4-1.

For Ojala, the weekend’s games proved to be a good learning experience for the new players on the team.

“The players that went to Germany this time have been training all summer, so we have very good chemistry in the team now,” said Ojala.

“It’s much better today with the Swedish team. We have a few new guys that are coming into the team now but they need to practice a little bit more first.”

German captain Frank Rennhack evaluated his team’s performance as one where they need to create more scoring chances and more offensive pressure.

“I think we have seen that we can play good hockey but that we have to work a lot in the next weeks to the Qualification Tournament,” said Rennhack.

“We had a good first game but the next day we were not able to repeat the same from the day before.”

One thing that both teams agreed on is the fact that team chemistry will be a key part of their success if they are able to attain a spot in Sochi.

“The most important (key to success) is having the team chemistry. In Japan, we had a really good group and we had a lot of group energy and everybody pushed their teammates to the limit and I hope we can repeat that,” said Rennhack, referring to his team’s gold medal at the 2013 IPC Ice Sledge Hockey World Championships B-Pool in Nagano, Japan.

Ojala feels that since the team has solved the issues that they had at the 2013 IPC Ice Sledge Hockey World Championships A-Pool in Goyang, a tournament where Sweden finished in eighth place, they have created a new mix of sledge hockey players, both young and old.

“I think we are a team that works very good when we are under pressure,” said Ojala.

Although Rennhack isn’t making any predictions similar to Ojala, he still thinks Germany have a good chance of making it to Sochi.

“We have to play every game like it’s the final in Japan,” said Rennhack.

“I hope that we are able to do that.”