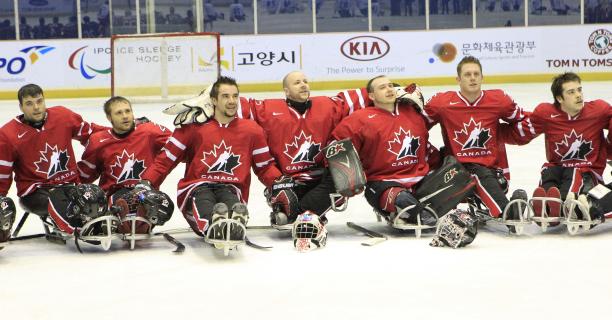 This article first appeared on Paralympic.org on August 18, 2013

When Kevin Rempel started his search for an agent, he knew it was going to be more than a challenge.

Rempel, 30, started to search on Google for representatives to help him build a reputation and a career post-hockey after his Canadian ice sledge hockey team captured gold at the 2013 IPC Ice Sledge Hockey Championships A-Pool in Goyang, South Korea.

“As an athlete, this is a big year to make some cash if you’re going to do it,” said Rempel, referring to the Sochi 2014 Paralympic Games, which are now exactly 200 days away.

Although Rempel’s search came up empty, there were still several people interested in helping the Team Canada forward out. Even with several different companies and agencies excited about the prospect of representing someone like Rempel, he chose to hold off, follow his gut feeling and focus on sledge hockey.

“My gut was telling me that I don’t want to sign with just anybody, I want to have somebody reputable, ideally a reference would be great and a bit of a track record where I can be like ‘hey, this is somebody that I want to represent me,’” said Rempel.

“Because even though in the grand scheme of things I’m still a bit of a nobody in the corporate world, and I still feel like I’m cautious about who I want to be calling on my behalf, I just haven’t felt comfortable with anybody that I’ve spoken to yet.”

Shawn Green is a hockey player representative and the founder of Premier Hockey Management, located in Ontario, Canada. In his five years of representing hockey players, he has never heard of any Paralympic athlete seeking representation.

“No, I’ve never had anyone who is a Paralympian ask me to represent them,” said Green.

While Green added that every company is always looking to expand, he also explains that, as an agent, you need to be a master at what you do and know your trade.

Rempel’s teammate, forward Brad Bowden, who has never tried to actively seek representation or sponsorships himself, thinks Paralympians are incredible people to support and have represent a corporate company.

“I think every Paralympian has a story and when you look at Kevin Rempel and what he’s been through, he’s got an amazing story,” Bowden said.

“I mean what company wouldn’t want to back him?”

The harsh reality is that a lot of companies still look to able-bodied athletes to represent their companies. Although the culture is slowly changing, it isn’t at the level it can be, according to Bowden.

“It’s getting way better than it has been, and people are starting to, especially with the internet now, recognise more and more Paralympic athletes on the street and get to see what they’re up to.”

Bowden noted the biggest difficulty is the lack of media coverage, and therefore people don’t know what Paralympians are up to.

Even though Rempel is still looking for more sponsorships and a representative, he does have one major sponsor already. That would be Wright Rehab, the rehabilitation centre that helped him after his accident in 2006 and reached out to him in July 2012 again for sledge hockey.

Brent Bannerman, co-owner and chief executive officer of Wright Rehab, said the partnership with Rempel, was an easy decision.

“When we met Kevin we just couldn’t believe what an inspiration he was to us and to others around us,” said Bannerman.

“So we thought, what a great way to support him and his quest and at the same time, have him get out an interact with some of our clients and be an inspiration to them too because they’re all at different stages of rehabilitation.”

“The fit was just perfect and a no-brainer. It was a win-win. With their support I can feel like I can train and not be pressured going into training,” he said.

Although Rempel’s search to build his reputation is on hold, he, Bowden and Bannerman feel like Paralympians have a place in a company’s forefront.

“I think it’s just a social thing that takes time to have acceptance,” said Bannerman. “I think Paralympians have a role to provide inspiration for people that go beyond what a normal athlete does. I think there is a unique place for it and I don’t think that our society has necessarily embraced it the way it can, but I think it’s a timing thing.”

For Rempel, being a pioneer to the concept of getting Paralympians more sponsorships would be more than fine.

“I would like to be one of those people that helps make a change,” Rempel said. “I have visions of doing big things and it’s just getting there, right? It’s not going to be like that forever.”

“Ten or 20 years from now, Paralympians will have options for whom to contact as an agent and it won’t be so hard to find one and companies are going to want to grab us regardless of whether there is another able-bodied option.”