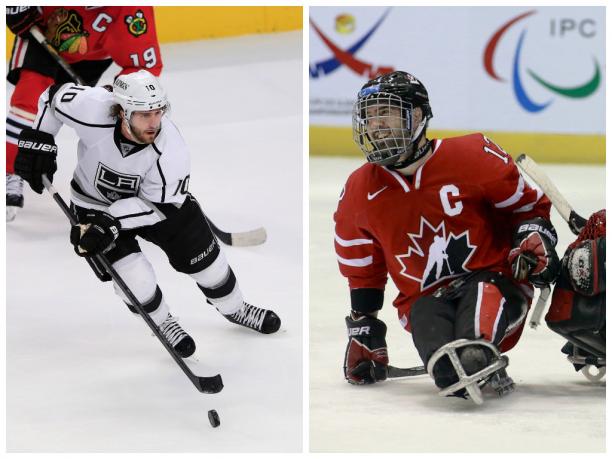 This article first appeared on Paralympic.org on August 8, 2013

A go-to player for the Canadian squad and regarded as one of the top offensive sledge hockey players in the world, Greg Westlake compares himself to Mike Richards of the NHL’s Los Angeles Kings.

“I’ve always grown up respecting guys that are really physical, hit a lot, get in other people’s faces but can really play the game as well,” Westlake said.

Playing the game of hockey with grit and passion is exactly what centre Mike Richards does. Known to defend his teammates when necessary, the former captain of the Philadelphia Flyers is a leader through and through, something that Westlake admires.

Both also know how to win. Westlake captured gold for Canada at the Torino 2006 Paralympic Winter Games and captained the Canadian squad that most recently captured gold in Goyang, South Korea at the 2013 IPC Ice Sledge Hockey World Championships A-Pool.

Every team needs a good last line of defence, and for the USA, they most certainly have two in the likes of Steve Cash and Ryan Miller. Cash, the goaltender of the USA’s ice sledge hockey team compares himself to the Buffalo Sabres goalie not only because of looks, but because of their styles of play.

“His style of stretching out to make the saves necessary and get his body in front of the puck is something I do as well,” said Cash. “His aggressiveness in cutting down the angle and making the net smaller for players to shoot at is similar to my play.”

Not only do Cash and Miller have similar styles, but they also have a similar love for the game and competitive edge to win. Miller, who is known to speak his mind with the media after a game, is also known to show his emotions while in the crease. This is something that Cash can relate to.

“I believe we share the same attitude in net. Miller’s tenacity and intensity in net is similar to how I play,” said Cash.

Adding to the list of similarities is the accolades for both players at Vancouver 2010. Although the result for Cash in the gold-medal game against Japan was more successful than Miller’s against Canada, both goaltenders were dynamite in the tournament. Along with the gold medal, Cash also stopped all 33 shots in the five games his team played. Miller was named the 2010 Olympics MVP and was named the best goaltender for the tournament.

Cash goes by the nickname of “money,” a name that Miller could easily garner as well with his consistent and excellent play. Cash was recently named to the USA’s roster for Sochi 2014, while Miller was one of six goalies named to the American orientation camp roster for the 2014 Olympic Winter Games.

Ovechkin scores a lot of goals playing with the Washington Capitals, winning the Maurice “Rocket” Richard Trophy three times in his career, most recently this past season. After each one of those goals, Ovechkin always has a big celebration for the Washington faithful, one of his many ways that he displays his passion for hockey.

For Lisov, he can often not sleep at night because he stays up and watches hockey games. The offensive talent for Russia helped them capture bronze at the 2013 IPC Ice Sledge Hockey World Championships A-Pool in Goyang, South Korea, and like Ovechkin, loves to score.

“(Ovechkin) seems to be resolute, goal-hungry, hard-working, and he never gives up on the ice,” said Lisov.

The Russian also strives to be like his fellow countryman in his work ethic.

“I want to make carpal throw as good as Alexander Ovechkin does,” he said. “I am working it out a lot. That is why I also believe that zeal and diligence are our common traits of character.”

A fan of the Capitals and Toronto Maples Leafs, Lisov admits that when the two franchises face off against each other, the Russian superstar and the Capitals get the bigger cheer.

Come February, both Lisov and Ovechkin will be key pieces for their hockey teams at Sochi 2014 in order for Russia to be successful in front of their home fans.

Any pure goal scorer knows that in order to be successful at any level, they must be patient and have a special sense when it comes to putting the puck in the net.

For veteran Norwegian forward Rolf Pedersen, he feels as though he and Pittsburgh Penguins centre Evgeni Malkin share that special sense.

“He has very soft, good hands with enormous speed,” said Pedersen. “When he decides to attack he can go right to the net, or make a good play for an assist. That’s how I do my game as well.”

Taking special attention to the small details in his game, Pedersen is a fan of the Penguins, especially defenceman Kris Letang, Malkin and superstar Sidney Crosby.

Norway will look to Pedersen to provide offence in the lead-up to Sochi 2014 and the International Ice Sledge Hockey “4 Nations” Tournament at the end of August.

For the love of the game. That is the reason why Zdenek Safranek, the captain of the Czech Republic compares himself to fellow countryman Jaromir Jagr.

“Desire for victory, playing with passion, a great feel and touch for passing the puck,” lists Safranek as reasons why he and Jagr are so similar.

The 20-year NHL veteran who most recently signed with the New Jersey Devils has dedicated a lot of time into growing the sport of hockey in the Czech Republic. This hasn’t gone unnoticed on Safranek, who was excited to hear about the Devils acquisition of Jagr, mostly due to the fact that Safranek is a huge New Jersey Devils fan.

“Since I was a little boy I was a Devils fan,” said Safranek. “My favourite player on that team is Martin Brodeur and it is amazing that Jagr just signed one-year contract with the Devils. Great to see all the Czech’s: Jagr, Elias, Zidlicky with Brodeur in the net. Team of legends.”