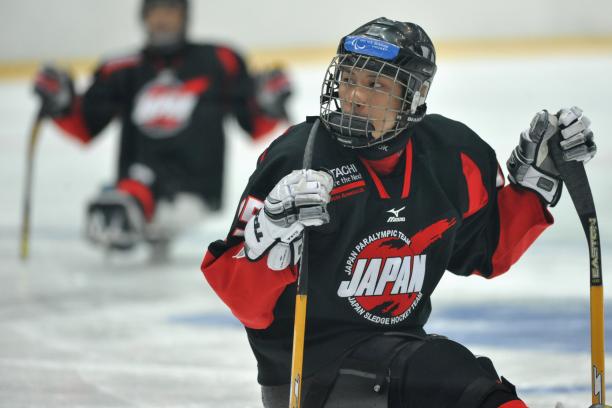 This article first appeared on Paralympic.org on October 7, 2013.

Exactly one month ago, on 7 September in Buenos Aires, Argentina, the city of Tokyo, Japan found out they would be hosting the 2020 Olympic and Paralympic Games.

Although the Tokyo 2020 Games will feature Paralympic summer sports, Japanese ice sledge hockey players ensure this will bring more awareness to para-sports in general in Japan, especially heading into Sochi 2014.

In just two weeks, the IPC Ice Sledge Hockey Qualification Tournament will begin in Torino, Italy, where Japan hope to take one of the final three Sochi 2014 spots available.

Mamoru Yashikawa, a veteran on Japan’s ice sledge hockey team, played at the Nagano 1998 Paralympics. As someone who played the sport on his home ice, Yashikawa still feels like Paralympians need to be taken more seriously.

“The Olympics and Paralympics are a goal for the top athletes to compete in but in Japan, the Paralympics are still not well known and the training facilities are limited,” said Yashikawa.

“I wish that (Tokyo 2020) will increase the notoriety of the Paralympics and that Olympians and Paralympians will be able to share training facilities.”

Although Yashikawa, 43, admits his chances of playing sledge hockey when the next Paralympic Winter Games come to PyeongChang, South Korea in 2018 are slim, it leaves the door open for younger stars such as Nao Kodama.

Kodama, 27, is one of the younger players on the Japanese sledge hockey team and has the potential of being around when the Paralympic Winter Games come back to Asia in 2018.

Kodama agrees with Yashikawa on the necessity of raising the Paralympic profile in Asia.

“As it is a winter sport, I think (Tokyo 2020) will not be enough, but wide publicity will be important to increase the notoriety,” said Kodama.

Wataru Horie, a newcomer to the sport of ice sledge hockey, does see light at the end of the tunnel in which the profile of Paralympians in his country is growing.

“Paralympic awareness is way behind in Japan now,” said Horie. “I can tell it is getting better step-by-step. To get more recognition, Paralympians should stand out more.”

The last time Tokyo hosted the Paralympics was in 1964, and their 2020 bid beat out Istanbul, Turkey and Madrid, Spain.

At the moment, Japan’s ice sledge hockey team have their sights set on Sochi 2014, but they still have to qualify.

Japan will enter the IPC Ice Sledge Hockey Qualification from 20-26 October as the fifth seed. They will need a top three finish in order to qualify for Sochi.

The Japanese squad are building off a silver medal at the 2013 IPC Ice Sledge Hockey World Championships B-Pool in Nagano, Japan.