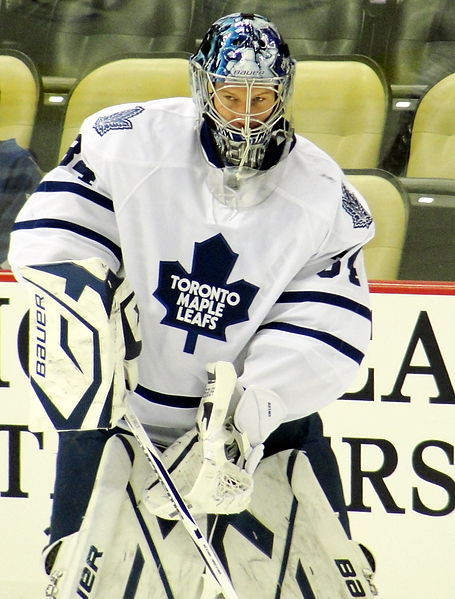 As the Toronto Maple Leafs question their goaltending situation after James Reimer went down in Monday’s 5-2 win over the Philadelphia Flyers, all fingers pointed to the acquisition of Roberto Luongo. But do the Leafs have another option? The option of picking up a young goalie instead of a more experienced one like Luongo?

It was mayday in Leafs nation. James Reimer who has been great so far in 2013 for the Buds (6-3, 2.31 GAA, .929 SV%) went down awkwardly in the second period against the Flyers, favouring his left leg.  And before Reimer could even get up to know if he was okay or not, Twitter blew up.  Roberto Luongo this, Roberto Luongo that, blah, blah, blah.  For some Leafs fans, seeing Reimer go down, was the end for them. It was time to trade, make the team instantly better, carry the classic Maple Leafs mentality of win now.

For Reimer, it was announced that he will be out at least a week with a mild MCL strain, but for someone who has a history with injuries, who knows when Reimer will be back between the pipes for the Leafs.

Sure, it is fine for Leafs fans to panic. Who else are they going to put in net? Ben Scrivens, after being a standout last year in the American Hockey League (AHL) for the Toronto Marlies has shown periods of inconsistency while being up with the big club, making him tough to be relied on. The backups Jussi Rynnas and Mark Owuya (AHL) have not delivered for the Marlies since Scrivens went up to the NHL. Rynnas (who will back up Scrivens in Toronto) has a record of 8-8 and a .913 SV%, which doesn’t seem bad, but just last week was lit up for five goals against the last place Hamilton Bulldogs (a game in which I attended). Also note that Rynnas appeared in two games last year with the Maple Leafs and was brutal (0-1, 4.25 GAA, .825 SV%).  Owuya isn’t NHL ready yet either, posting a low .869 SV% in seven games this season for the Leafs AHL affiliate.

So, if Reimer’s injury proves to be longer than expected and this four game winning streak that the Leafs currently have going is lost due to poor goaltending, what should Leafs general manager Dave Nonis do?

It always sucks to trade with a bitter rival, but after seeing someone like Erik Karlsson go down last night with an Achilles injury that will require surgery, the Ottawa Senators are in desperate need of a defenceman. Ah, a defenceman, the Leafs have plenty of those, while the Sens, they have plenty of good goaltenders, and only one crease.

Ben Bishop, the massive 6’7″ goaltender that the Sens acquired from the St. Louis Blues and Senators goaltending prospect Robin Lehner are both solid goaltenders that have the potential of being a number one on an NHL roster.  Lehner is still young, but if the offer is right, then the Sens may consider moving him.  The 21-year-old Swede is having a great season with the Binghamton Senators in the AHL, posting a record of 18-8, GAA of 1.85 and a save percentage of .946.

So who could the Maple Leafs send back to the Sens? Somebody like Cody Franson, who is having a great season so far under head coach Randy Carlyle would be a good fit in Ottawa. But the Leafs would also need to give up some more pieces, much like they would with Luongo. Trading away a defenceman for a goaltender would open up a roster spot for Jake Gardiner, who is currently rehabbing a head injury with the Marlies.  As a friend of mine noted,  “the AHL is too easy for Jake, he’s just making the motions.”

Another possibility (if the Leafs choose to go the younger goaltender route), is former Team Canada World Junior, Jake Allen of the St. Louis Blues. Allen was called up last night for the Blues and played alright, allowing three goals in a 4-3 overtime win over the Detroit Red Wings. Was general manager Doug Armstrong showcasing Allen to other teams in hopes of trading him?

The options are certainly out there for the Toronto Maple Leafs. So the question returns…how much are the Leafs willing to give up for a good goaltender, and how long will they wait to do so?  How long will this hot start to the season last, and is Ben Scrivens the one that will guide them to success if Reimer is out long term?