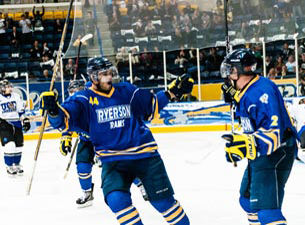 In a season that started off with high expectations, the Ryerson Rams men’s hockey team duplicated their success from 2011-12 but did not exceed those expectations, falling once again to UQTR in the first-round of the OUA playoffs.

In 2011-12, the Ryerson Rams men’s hockey team tied the franchise record for most wins in a season since 1988-89 with a record of 13-12-1. When I first started doing research on the team for the 2012-13 season, I could sense a positive vibe coming into training camp, and why not.  There were 17 returning players from the year before, they were playing in a brand-new building which used to play home to the Toronto Maple Leafs, and they were a above .500 team just a few months before.

When I talked to assistant captain and defenceman Brian Birkhoff before the season started (Season Preview), he said that the team wanted to win all their home games and get home ice advantage in the playoffs.  At the time, it was a realistic goal that could have been achieved.

But the season, and the Rams players had different ideas.  A 2-7 November was the kicker for the Rams and where the season really took a turn for the worst.  With that said, the team also was involved in a lot of one goal games in November, most notably the 4-3 loss against the Nippissing Lakers when the Lakers scored with one second remaining on the clock.  After a overtime thriller against the Carleton Ravens on Dec. 1, 2012, the team went into the holiday break with a record of 5-11.

It was catch-up time after the break and the Rams were fortunate enough to get Jamie Wise into their formation. Wise started the season with the Rochester Americans of the American Hockey League before being released and during his two month stint with the Rams, showed why he is a high-calibre player.

Wise played in only 12 games for the Rams, (less than half the rest of the team) but still ended up eighth in team scoring with 14 points and tied for second for goals scored with eight.  In my opinion, if it weren’t for Wise, the Rams wouldn’t have made the playoffs.  The team managed to go 7-5 after the break and squeak into the playoffs in the eight spot in the division, exactly what I predicted.

Facing a team like UQTR in the first round of the playoffs is tough.  Here’s a team that, after beating Ryerson in the first round of the playoffs last year, went on to the University Cup.  They are a good hockey club, and they showed that on February 13 when (other than a one minute stretch in the third period) eliminated the Rams offence.  It was interesting to watch how passive their defensive style of play was and how they limited shots on their goaltender, Guillaume Nadeau who faced under 20 shots through two periods.  It was also interesting to see the ice time that Wise and freshman Michael Fine received in the third period of game one on Mattamy Home Ice. I’m no mathematician  but I would predict they were on for at least 15 minutes of that period. And through it all, they were dominant, with both chipping in for beautiful goals.  The two goals were not enough as stupid penalties cost the Rams the game, and ultimately the series.

Twenty-eight penalties in the series, twenty-one of which were in game two, is what killed the Rams and kept them shorthanded through their 2013 playoffs.  In game one, les Patriotes scored three times on the powerplay, most notably in the third period; with the score 3-2, Jamie Haines decided to take a cheap shot at a vulnerable UQTR player in the Rams zone, and the Patriotes capitalized.  One hundred and nine penalty minutes in game two doesn’t help you a whole lot either.

It’s a shame to see, year after year, the Rams defeating themselves with the amount of penalties being taken. Sure, you can blame it on the ref, but when it’s the same problem this year that hurt you last year, and the year before that, at some point you’ve got the look in the mirror and smarten up.

For three of the Rams, the 7-3 loss on Saturday marked the end of their CIS hockey careers. Greg Payne, Louie George and Michael Paolo leave the Rams after illustrious five-year careers. Going forward, the Rams have a huge gap to fill on right-wing with Payne out of the lineup, especially on the teams first line.  I predict that Dustin Alcock, who was the only Ram to play in all 28 games this season and lead the team in points with 20, will play alongside captain Andrew Buck and Jason McDonough next season unless head coach Graham Wise finds a great recruit.

Goaltending will be a big question mark going into next season as well with George’s tenure as a Ram coming to a close.  The goaltender who didn’t get any action a year ago, shone in the second half of this season and with the inconsistency of Passingham and Gleeson, I wouldn’t be surprised if coach Wise looks to the OHL to find his next number one goaltender.

Another interesting thing to look for heading into next season is if Jamie Wise will stay with the team or return to pro hockey. He has certainly shown scouts that the CIS is a league that he can dominate, but my guess is that if the opportunity to return to the AHL or even the ECHL present itself come September, he will not be a Ram in the 2013-14 season.

I would like to point out some players that I was impressed with this season. As little as they were played, Steve Taylor and Mitch Gallant were two of the best fourth line players in the league this season. Every time they stepped on the ice, they were a bruise-battering machines and created plenty of scoring opportunities. They should be recognized for their strong play entering next season. Kent McPherson was another solid addition to the squad. He isn’t flashy but he sure helped out on the powerplay and guided the Rams to the second best powerplay percentage (24.0%) in Canada.

Thanks for a great season boys, it will be an interesting summer to see who is recruited, who stays with the team, and where the Rams sit entering next season.

Ryan McKenna is a broadcaster and writer for the Ryerson Rams Network. You can watch Rams games live, online at http://bit.ly/OjwT1v.