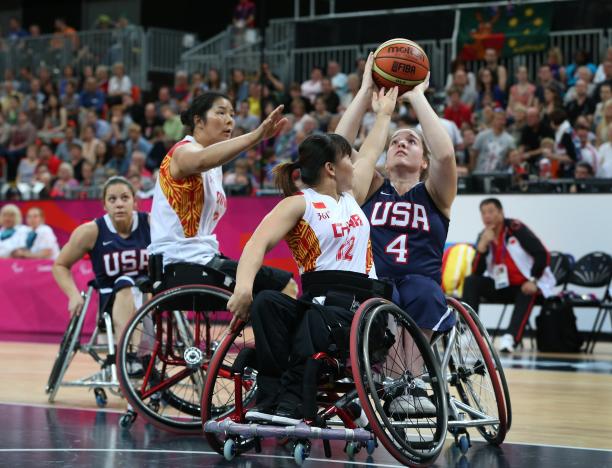 This article first appeared on Paralympic.org on June 21, 2014.

The USA provided the biggest upset of the first day of competition at the 2014 Women’s World Wheelchair Basketball Championships in Toronto, Canada, on Friday (20 June) defeating London 2012 silver medallist Australia, 68-52.

In Pool A action, Rebecca Murray was dynamite for the Americans, tallying a game-high 30 points to lead her team. She says that beating a team with a higher ranking is a huge boost to start the World Championships.

“It gives us confidence,” Murray said. “We knew Australia was higher than us so we we’re gonna have to bring our A game out there.”

The USA never lost the lead throughout the game, holding a 36-27 lead at half time.

In the fourth quarter, Australia got as close as eight points, but couldn’t manage to get anything further.

Australia had three players in double digits but it was Amber Merritt that had a team high 14 points.

Paralympic champions Germany got their Pool B campaign off to a winning start with a 59-45 victory over China.

After a slow start to the game that only saw three points scored in five minutes, Germany exploded at the end of the quarter to take a 20-11 lead after 10 minutes.

China kept it close, thanks to the play of Jiameng Dai, who finished the game with a team-high 12 points.

Germany broke away in the third quarter, pushing their lead to 17. China made a strong push in the final 10 minutes but it was not enough to knock off the Germans.

Leading Germany offensively was Marina Mohnen who had a game-high 19 points and four assists while Annika Zeyen had 17 points.

Zeyen was impressed with her team’s play but still feels they have some work to do when they play Great Britain on Saturday at 20:00 local time.

“I mean, that was our first game and there’s a lot we can do better, especially on defence and play a lot harder and be on the chairs more,” Zeyen said. “We gave them too much space and then also offensively, we can move the ball a lot better.”

Host nation Canada made a statement to their opponents with a 83-53 Pool B win over Japan in front of a near capacity and loud crowd.

The Canadians held a 12 point lead at half time but exploded in the second half of play, pushing the pace of play against the Japanese.

Mari Amimoto had a team-high 18 points for Japan and also added 10 defensive rebounds.

Brazil closed the gap to nine before the half, but Great Britain extended their lead to 44-27 at the end of the third quarter.

Perla Assuncao and Lia Martins were the top offensive forces for Brazil, each contributing 10 points. Martins led her team in rebounds with eight.

In Pool A France came out hard on Friday defeating Mexico 61-42.

Right from first tip, France had the advantage and was led by Fabienne Saint Omer-Delepine’s 10 points after the first half of play. After 20 minutes, France led 28-18.

In the second half the score did come a little closer but in the fourth quarter, France pulled away, posting a lead as big as 22 points.

Saint Omer-Delepine finished the game with a game-high 26 points and 11 rebounds while Mexico’s Floralia Estrada finished with a double-double of her own, posting 14 points and 10 rebounds.

No. 3 ranked the Netherlands handled first-time world championship opponent Peru 89-5 earlier on Friday in Pool A.

The Netherlands used their strong defence throughout the game to gain the advantage. Peru’s Pilar Jauregui had four points to lead the way while the Netherlands had five players in double digits in a well balanced attack.

Action continues on Saturday at the Mattamy Athletic Centre with six games scheduled.

For live results and a live stream of the action, please click here.