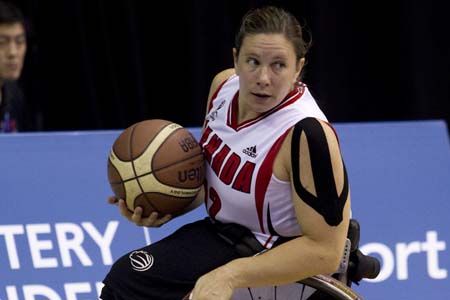 TORONTO — There’s a special feeling that comes with playing on home soil. The home-court advantage of the fans cheering you on can match nothing else that an athlete has ever done.

For Canada’s Tracey Ferguson, that home-court advantage will happen not only once, but twice in the next two years; first at the 2014 Women’s World Wheelchair Basketball Championships from June 20-28 and then again at the Toronto 2015 Parapan American Games.

Ferguson is a six-time Paralympian for her country, joining the senior women’s wheelchair basketball national team in 1991 and winning her first Paralympic gold medal at the 1992 Games in Barcelona, Spain.

From there, she has gone on to win two more Paralympic gold medals in 1996 and 2000. At the 2004 Paralympics in Athens, she helped her team capture a bronze medal.

For former head coach Tim Frick, who coached Ferguson since she joined the national team up until 2009, having Ferguson play in front of her family and friends for the first time internationally is amazing.

Playing a world championship in Toronto is not the only achievement that Ferguson has completed in her hometown lately.

Off the court, Ferguson is seen as a role model to others and that was portrayed in 2011 when she was selected to wheel alongside Rick Hansen in the Rick Hansen 25th Anniversary Relay of his Man in Motion World Tour.

The chance to wheel alongside Hansen was a special moment for Ferguson and also felt like her life came full circle.

When she was 12 years old, she wheeled alongside Hansen on his original Man in Motion World Tour that started in 1985 and lasted 26 months. The original world tour saw Hansen wheel around the world to try and find a cure for spinal cord injuries and create a more inclusive and accessible world.

“It was just pretty exciting to see 25 years later how that kind of turned around and went from being a new kid in a wheelchair, knowing nothing about wheelchair sports to wheeling with one of the best wheelchair athletes and people, best human beings in my book,” Ferguson said.

Her work as a difference maker across Canada has not gone unnoticed by Hansen.

“Tracey’s work raising awareness and encouraging youth with disabilities to get involved in sport at an early age has made an exceptional difference,” Hansen, the founder and chief executive officer of the Rick Hansen Foundation, said.

“Her personal story of overcoming many barriers that exist for disabled athletes is a message that instills hope and pushes us all to continue working towards creating an accessible and inclusive world.”

As for the world championships in her hometown, Canada enters the tournament ranked sixth in a pool with defending Paralympic champion Germany, Great Britain, China, Japan and Brazil.

“We’ve made a lot of changes in the last quadrennial and I think we’ve put ourselves in a good position to be really successful at this point in the world championships. I’m excited,” Ferguson said.

Canada starts off their tournament on June 20 after the opening ceremonies at 1 p.m. ET against Japan. All games can be seen live online atwww.2014wheelchairbasketball.com/connect/watch-the-games-live.