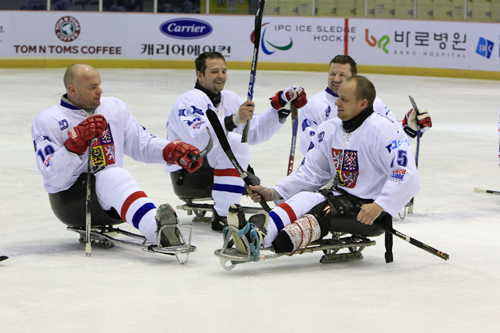 This article first appeared on Paralympic.org on July 24, 2013.

Logic can only go so far. Although it would be nice to defy logic and stay young forever, the Czech Republic and their team of veteran ice sledge hockey players realise it’s a whole different game on the ice.

With many players on their team hovering around 30 or older, age has become a concern for the Czechs as they prepare for next year’s Paralympic Winter Games.

With the Sochi 2014 Test Event for ice sledge hockey taking place in late August – also featuring Norway, Russia, and defending world champions Canada – Czech head coach Jiri Briza is busy preparing and training his team as they aim for their first Paralympic medal in the sport.

Thirty-seven-year-old Briza was named the head coach of the Czech Republic in early 2013 and took over a team of veterans. The former assistant coach on the team guided his club to a fourth-place finished at the 2013 IPC Ice Sledge Hockey World Championships A-Pool in Goyang, South Korea and is ready for the challenge of Sochi 2014.

“I am very excited and honored to the coach of our team,” said Briza. “The fact is that our players are one of the most disabled in sledge hockey and we’re still in the top four in the world. To me our players are warriors and it will be fantastic journey for our team.”

Recruiting the next generation

Although the Czech team may be warriors, they are also elderly compared to the young and flashy offence of the USA.

“The average age of our defence is over 40 years old and the age average of, for example the American offence is a little over 20 years, so yes, this could be harmful for when it comes to game competition,” said Briza.

The last line of defence on the ice for the Czech Republic is star goaltender Michal Vapenka, and he, too, admits his age is starting to become a factor. Vapenka, 40, said that no matter what the circumstances, his team must prepare for game action and their opponent.

“I think age is a big factor, our team is getting old,” he said. “But we will fight and get ready for that. Usually it is great to have experienced old players and also young and wild players for their rapacity in one team…all in balance. But this is what we are now, this is what we’ll go with.”

For many in the Czech ice sledge hockey programme, the attention has started to turn toward the future and recruiting younger players. The concern however, is the lack of young players willing and looking to play the game.

Michal Greir, a 27-year-old Czech forward, knows the number of sledge hockey players in his country are limited.

“Sledge hockey is a tough sport and it is hard to find new players, that is why our team is getting old,” Greir said.

Recruitment has proved to be tough, and Briza even admits it. He said the current players, along with himself, are doing their best to hunt down current and eager sledge hockey recruits.

“The biggest concern in our program will face after Sochi 2014 is to find new, young, sledge hockey players that would be interested in sledge hockey,” said Briza. “For now we do all our best in marketing media propagation so we can get as close as we can to the people for finding new potential young players.”

Working with what they have

For now, Briza must remain confident in the team he has and its potential to win the country’s first ever ice sledge hockey Paralympic medal after finishing fifth at Vancouver 2010.

His message to his team demands confidence: “We are confident that we are masters of our fate, that our task before us is not above our strength and that no toil and effort is greater than we can bear.

As long as we believe what we do, and until we have indomitable will to win, victory is ours. To live on the edge, go and enjoy sledge!”

As for Vapenka and Greir, they are both very excited about Sochi 2014. Vapenka has been on the ice at least twice a week along with his other extracurricular healthy lifestyle. Greir won’t be joining his team in August at the Test Event due to the birth of his two children – twins – although he’s continuing to practice with the team.

And if they can’t find enough younger players for the 2018 Paralympic Games in South Korea, Vapenka may even be convinced to stick around.

“Who knows, everyone on our team, we all love this game,” he said. “And if there won’t be any interest from new young players to be sledge players and try to be better than us oldies on the national team, then we will still stay and play.”