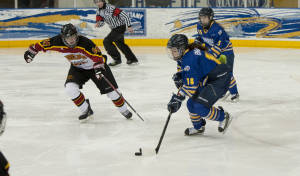 This story first appeared at RyersonRams.ca on February 10, 2013.

TORONTO- Averi Nooren had two goals and an assist to pace the No. 6 Guelph Gryphons offence to a 5-0 victory over the Ryerson Rams on Saturday afternoon at Mattamy Home Ice.

With the win, the Gryphons improve to 20-3-2 and are in second place in the OUA standings, just one point behind conference leading Laurier Golden Hawks with one game to go in the regular season.

Stephanie Nehring turned away 18 shots for the Gryphons for the shutout. Forward Melissa Wronzberg admitted that the Rams (2-22-1) had a tough time solving Nehring, “We faced a pretty good goalie, we just need to get more shots I think if we’re going to be more successful.”

Rams head coach Lisa Haley agreed, “They have Stephanie Nehring in net which in my opinion is one of the best goalies in the OUA, so even when you crack through their lineup to try and score, on a goalie of that calibre, is tough.”

The Gryphons opened the scoring at 6:25 of the first period with a goal by Jessica Pinkerton on the powerplay.  Nooren with her first of the game from Kimberley Wong gave the Gryphons a 2-0 lead heading into the first intermission.

A three goal second period opened the gap with Guelph goals by Leigh Shilton, Jenna Lanzarotta and Nooren with her second of the game.

Emma Crawley made her third straight start for the Rams and made 25 saves in the loss.

Rams captain Nella Brodett collided into the boards in the third period and was down for several minutes before leaving the ice. Brodett is listed as questionable for Sunday’s final regular season game against the Brock Badgers.

Wronzberg said that the Rams will be ready for what the Badgers have to offer. “We’re fired up, we think we closed off today’s game well and if we can go at it with the same energy as the third period, we think we can beat them,” said Wronzberg.

Game time against the Badgers is 2 p.m. on Mattamy Home Ice. The game can be watched live online on the Ryerson Rams Network.