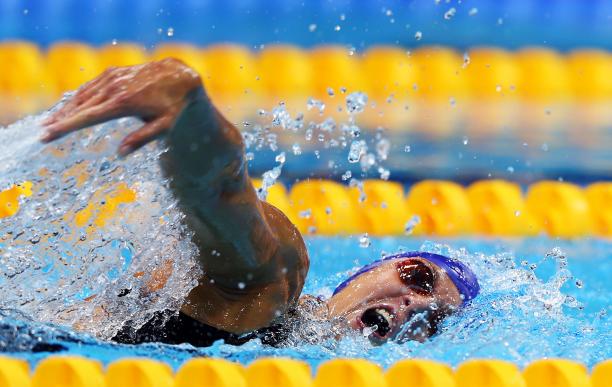 This article first appeared on Paralympic.org on June 13, 2014.

“[My goal] would be to swim my best times so far in my swimming career,” said Rung who competes in the S5 class. “So there’s a lot I want to do and you always want to get better in the sport so that’s my main goal for the Europeans as well.”

In March 2014 at a swimming meet in Denmark, the double Paralympic champion opened her season with a 50m breaststroke SB4 world record of 48.05 seconds. She followed up one month later with new world 200m breaststroke SB4 mark in Berlin (3:48.00).

At the 2013 IPC Swimming World Championships in Montreal, Canada, Rung won four gold medals and a bronze. However, the times were not enough for her and coach Morten Eklund and they vowed for a better 2014.

“We have 10 swimming sessions together every week, we have three weight sessions every week and we have five dry land sessions every week so a standard week, when we are home, it is 28-29 hours of training for her,” said Eklund. “I see her more than I see my wife during the week!”

Rung commented “I think having such a close training relationship with my coach is one of the main factors for succeeding as well, because now, when he knows me as well as he does, he knows when I’m tired and when I have extra energy. So the training that we’re doing fits me perfectly.”

However, the 24-year-old is looking over her shoulder at various swimmers including Ukraine’s triple Paralympic champion Nataliia Prologaieva, who currently holds the world record that Rung would most like to claim – the 100m breaststroke.

According to Rung, Spain’s Teresa Perales and Israel’s Inbal Pezaro are also threats to her retaining her four European titles at the Peter van den Hoogenband stadium in what will be the biggest gathering of swimmers in Europe since London 2012.

Now, with Rio 2016 just over two years away, Rung will be treating Eindhoven 2014 and the Glasgow 2015 World Championships as an important milestone on her way to equaling, and even bettering, her London 2012 golds in the 200m freestyle S5 and the 50m butterfly S5.

“I also take the Europeans and the World Championships towards the Paralympics very serious because I know the other countries do prepare the best for the events as well.

“Knowing that my competitors will be well prepared makes me want to be as prepared as I can for these championships as well going into the next Paralympics Games in Rio.”

A full biography of Sarah Louise Rung can be found at the IPC website.

Tickets and media accreditation for the 2014 IPC Swimming European Championships from 4-10 August, which will feature around 500 athletes from nearly 40 countries, are now available at www.eindhoven2014.org.