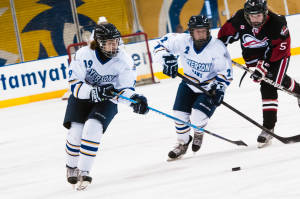 This article first appeared on RyersonRams.ca on September 20, 2013

TORONTO – The Ryerson Rams women’s hockey team dominated the play for the entire 60 minutes, en route to a 7-1 win over the University of Massachusetts.

The Rams were lead offensive by assistant captain and third-year forward Melissa Wronzberg (Thornhill, Ont.) who had two goals and two assists at the Mattamy Athletic Centre at the Gardens.

“She played tonight like exactly what we expect from her. It’s driving the net, being the threat on offence, it’s exactly what she did,” said interim head coach Pierre Alain.

Wronzberg wasn’t the only one contributing offensively for the Rams, as the team fired 50 shots on UMass veteran goaltender, Chelsea Coral.

The game plan, according to both Alain and Wronzberg was to be hard on the puck and that was exactly what the Rams were able to do.

“Especially in the third (period),” said Alain. “We talked about stepping up, setting the tone, push the limit and be first to the puck and win the battles. Just step up, keep stepping up and it’s exactly what they (Rams) did.”

The aggressiveness of the team is something that Wronzberg and her teammates talked about internally, even before Alain came in the room prior to the game.

“I think Pierre has been encouraging us a lot to make sure we bump whenever we’re on the forecheck or back-checking,” said Wronzberg. “Just continuing to practice with him and practice on those things, and coming into games, it looks good as we have the season coming in a couple of weeks.”

With the Rams starting the regular season on Oct. 3 against the University of Toronto Varsity Blues, preparations are underway to get the team ready for OUA competition. Alain has elected to rotate his goaltenders so that they can all see game action before the contest against Toronto.

Alex Armstrong (Toronto) got the win for the Rams Friday night, stopping 13 shots. Emma Crawley (Herring Cove, NS) will play NAIT on Saturday while Cassandra McNichol (Toronto) will be between the pipes on Sunday against the Carleton Ravens.