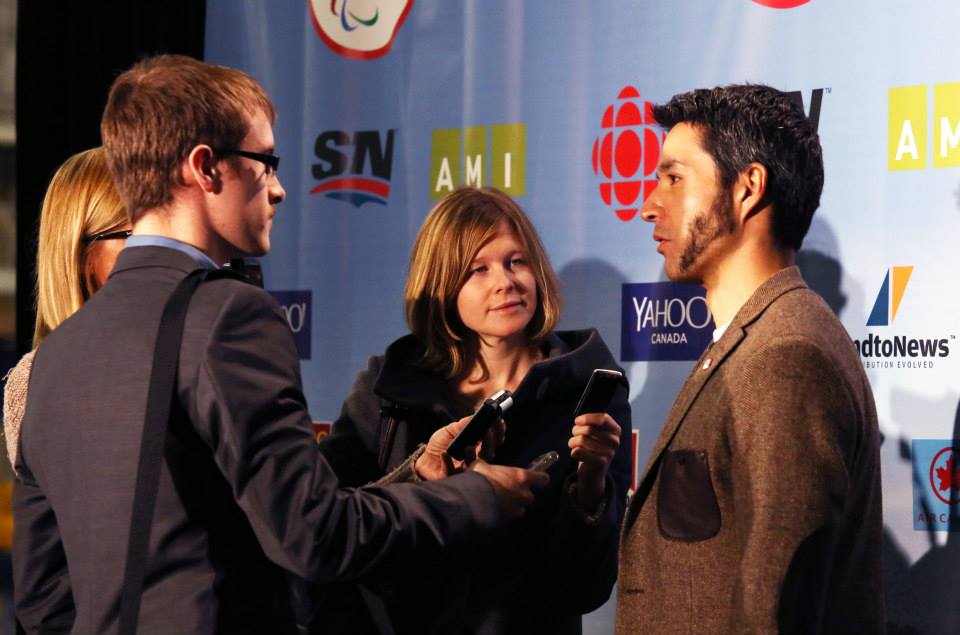 A couple days ago, my brother Patrick asked me one of the harder questions I have received in a while. Normally, it is me who is asking the tough questions, but on this particular day, it was the other way around. Patrick asked me,

“So Ryan, who was your favourite person to interview in 2013?”

So I’ve set out on a mission to track down my top five favourite interviews of 2013. To be honest, these five are all equally fun and were a blast and a half to do. I looked over my tape recorder, and my various articles and I’ve been able to estimate over 100 interviews in the last year. That’s a lot of talking, but it was also a lot of fun. Thank you to everyone who took the time to speak to me this year, it was a memorable one and I look forward to talking more sports in 2014.

Back in April, I was working on an audio project for JRN 112 at Ryerson and my first idea for a subject and story was former Major League Baseball pitcher, Dirk Hayhurst. Dirk seemed like a nice enough guy through the various books that he’s had published and that I’ve read and the work that he does at Sportsnet on Toronto Blue Jays broadcasts. He wasn’t the easiest guy to track down to do the story though. After several tweets and emails, I finally convinced him to take 10 minutes of his time to speak with me about his transition from the bullpen to broadcast booth. Dirk was clear in his interview acceptance email that A) I can only have 10 minutes of his time because he was busy preparing for Opening Day and B) If I gave his phone number to anyone he would castrate me. I was a bit scared to say the least. Dirk turned out to be a really nice guy over the phone and our conversation turned into something over 10 minutes. To say I was a little relieved that I wouldn’t be castrated at the end of the interview, was an understatement.

At the start of December, we were given an assignment in JRN 123 – Ethics and Law in the Practice of Journalism to write about an ethical dilemma in the field of journalism we see ourselves in after we graduate. My story was about reporting in hockey dressing rooms and the journalistic ethics that go along with it. After an email to the newsroom of USA Today and a couple of tweets and direct messages on Twitter to Kevin Allen of USA Today, he agreed to do an interview. I don’t think I appreciated Allen as much as I should have due to the fact that I’m Canadian and don’t get to see his work on a daily basis. I left our 20 minute phone conversation feeling like I had just talked to a legend. Kevin was just such a nice and intelligent man and you were able to tell why he’s been a hockey writer at USA Today since 1986 and why he was the 2013 recipient of the Lester Patrick Trophy for his contribution to hockey in the USA. After I was done all my questions, we chatted for another five minutes about just general things and I admire Allen for what he has done for hockey and the kind of writer he is.

In one of my most recent interviews which took place a couple weekends ago at the MasterCard Centre in Etobicoke, Ont., I had the privilege of interviewing one of the most respected faces in Canadian hockey, Bob McKenzie. I was doing a story about the Hockey Canada U20 World Junior team and their exhibition game against the CIS Toronto Selects and was reporting for the CIS. I was just about to do my stand-up when my cameraman, Elwin, suggested that I ask Bob to come on camera with me. I was hesitant at first but I mustered up the courage to ask him and it was a great life choice. I introduced myself as someone from Ryerson (his alma matter) and said what I was doing and he was more than willing to speak with me. I’m pretty sure his exactly response was, “It would be a pleasure. I just have to do this (points to phone) and then go on camera and then I’ll help you. So this (phone) and then that (TSN set) and then we’ll be good to go.” Truth be told, he finished his TSN piece and then almost walked right by us! None the less, he stopped and gave us five minutes of his time and for that, I respect and appreciate the man. It was a lot of fun. I’m still 631,268 Twitter followers behind the man though…someday…

I may be biased but Kevin Rempel and Brad Bowden were two of the funnest guys that I have had the opportunity to interview in 2013. In February, I was given the chance to write for the International Paralympic Committee and therefore I have interviewed both Kevin and Brad on a few different occasions. Throughout my 10 months with the IPC, I have been given the opportunity to interview a lot of really great and really inspirational people from all around the world and for that, I’m thankful.Kevin and Brad play on the number one ranked sledge hockey team in the world, and that’s why I have interviewed them so much. I first came across Kevin in July when he was looking for an agent and took to Twitter to find one. I had a buddy that was looking to break into the business and I put him and Kevin in contact but things didn’t work out. Kevin was the inspiration and idea for my August story for the IPC (link above) on the difficulties of being a Paralympian and being taken seriously. I had a fantastic 30+ minute conversation with Kevin for that story and he was very honest and open with me about some of the struggles that he’s faced on his path to get an agent. Brad is an IPC One to Watch in the lead up to Sochi 2014 in March and I have interviewed him on many occasions now. After I’m done all my questions we will chat for the next 10 minutes on life and our opinions on different politics and what not. That’s one of the things that I enjoy most about being a journalist, the relationships that you build and grow. I got to meet Kevin and Brad at the start of December for the World Sledge Hockey Challenge in Toronto and I look forward to interviewing them more in the lead up to the Sochi 2014 Paralympic Winter Games.

Current general manager for the Charlottetown Islanders of the Quebec Major Junior Hockey League (QMJHL) Grant Sonier, hosted a coaching clinic in my hometown of Summerside, PEI at the end of July and the keynote speaker at the event was the head coach of the Ottawa Senators, Paul McLean. Yes, the moustache man himself was in little ol’ PEI and as part of my summer radio show that I hosted, SPUD Sports Sunday, and I took the time to interview him for the show. I was a little bit nervous at first because McLean was the highest profile person I had ever interviewed in my young journalism career at the time, but it didn’t take me long to realize that he’s just another Maritimer (grew up in Antigonish, NS and has a summer home there). I talked with Paul about his Senators, how they will fair out in the new NHL division alignment and about the Canadian Olympic team. Paul reminded me a bit of my father and I’m not quite sure why. It could have to do with the fact that my dad also once grew an amazing moustache, I’m not sure, but he sure made me feel comfortable and was a blast to interview. I will always have a lot of respect for that man.

There you have it! My top five interviews of 2013. I must give an honourable mention to all my collegues and the student-athletes at Ryerson playing and coaching the Rams. For the eight month school year, they are the ones that I see and talk to on a daily basis and they have helped me improve immensely in the last calendar year as both a journalist and person. Thank you to everyone for all their support this past year. I look forward to the mystery that lies ahead that is 2014 and the experiences that are ahead of me.