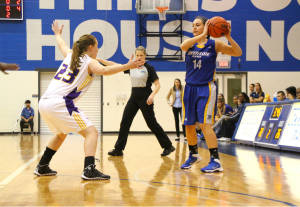 This article first appeared on RyersonRams.ca on Nov. 10, 2013

TORONTO – With the Ryerson Rams trailing by one with 4.3 seconds left on the clock, Nicole DiDomenico (Niagara Falls, Ont.) in-bounded the ball to Keneca Pingue-Giles (Winnipeg, Man.) who had a wide open lane to the basket and made no mistake.

“I was so scared. I shot it so hard off the backboard I didn’t think it was going to go in but it did so I’m glad about that.”

That bucket by Pingue-Giles was the dagger against the Laurier Golden Hawks on Saturday night at Coca-Cola Court and capped off a Rams victory, 60-59.

In what was the most thrilling matchup so far this season for Ryerson against the undefeated Golden Hawks, it was another good start with the Rams leading at the end of the first quarter. Despite scoring 18 points, it was all Laurier in the second frame. The Golden Hawks put 16 points on the board and with a late bucket took a 30-28 lead at recess.

A strong third quarter was exactly what Ryerson did, putting up 21 points to pull ahead of Laurier going into the final frame.

Sokoloff was a big part of that third quarter offensive outburst. The senior forward broke her previous career-high of 16 points by putting up 19 points to go along with four boards on Saturday.

“My teammates just saw me inside,” said Sokoloff. “Laurier was missing a few of their bigs and I got to capitalize on that and it was amazing.”

In a fast paced fourth quarter, the two teams went back and forth, exchanging great scoring opportunities. Many thought the Rams fate was sealed after a late shot was dropped from beyond the arc by Laurier’s Laura Doyle, but a Ryerson timeout and possession changed the momentum.

“As soon as that shot went off, we could have gave in and said that it’s over, but we didn’t, we kept our heads up and came out with the W,” said Pingue-Giles who finished the game with seven points and eight rebounds in 20 minutes on the court.

Samantha Jacobs was Laurier’s top scorer, putting up 10 points in the loss.

For head coach Carly Clarke, earning two wins at home this weekend and putting their record at .500 (2-2) is huge going forward.

“I think overall it’s great to come away with a win for sure to go 2-0 this weekend is big for us in the standings, big for us in our confidence.”

Ryerson will next hit the court on Nov. 15 at Coca-Cola Court against the Windsor Lancers. Opening tip-off is set for 6 p.m.