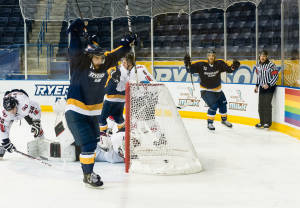 NORTH BAY, Ont. – Goals galore was the story on Saturday night for the Ryerson Rams, outscoring the Nipissing Lakers, 9-7.

The win moves Ryerson into a tie for second place in the OUA West standings with 18 points and was also their fourth straight win.

The Rams had six players who had two or more points on the night, with Jamie Wise (Stoufville, Ont.) standing out racking in four points (2G, 2A).

After Nipissing got out to the early 2-0 lead, Ryerson stormed back with two goals in 45 seconds by Wise and Domenic Alberga (Maple, Ont.) to tie the game going into the first intermission.

It was a crazy second period to say the least with neither starting goaltender making it out of the period before being pulled. Nine goals combined by both teams with Ryerson scoring four of those while Nipissing netted five goals, four of which were on Rams starter Adam Courchaine (Kanata, Ont.).

Troy Passingham came in relief of Courchaine and played 30 minutes, making 23 saves and picking up the win.

A big third period by Ryerson though was the difference with Andrew Buck (Newmarket, Ont.), Alberga and Wise all netting their second goals of the game.

Two of those third period goals came on the powerplay. Overall, Ryerson went 3-6 on the man advantage.

–  Lucas Froese (Grunthal, Man.) had a three-point night for Ryerson and scored once. The rookie is now on a two game scoring streak after netting his first career OUA goal against Laurentian, Friday night.

–  Ryerson is back at home next weekend as a pair of Quebec team’s from the OUA East, UQTR and Concordia come into town. Ryerson plays UQTR on Friday, Nov. 29 at 7:30 p.m. while the game against the Stingers is on Saturday afternoon at 2:30 p.m.