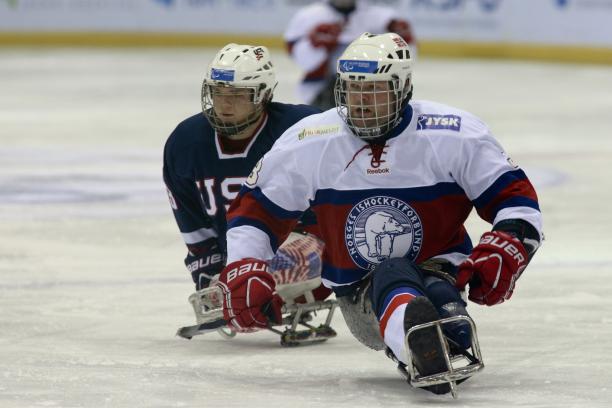 This article first appeared on Paralympic.org on April 16, 2013.

Prior to the start of the 2013 IPC Ice Sledge Hockey World Championships A-Pool in Goyang, Korea, veteran Rolf Pedersen and Norway did not envision their start to the tournament would be like this.

Starting off the tournament 0-2, Norway now faces an uphill battle if they look to make it to their goal of reaching the Paralympic Games in Sochi next year.

For Pedersen, the possibility of playing in Sochi could be one of his last. At 43, he knows he is no longer the young player he once was.

“You have to have more time for physical treatment, and also more rest between the really hard training sessions,” said Pedersen of his age. “But I’m still hanging in there, I understand and know in that at this age you get nothing for free.”

Pedersen is regarded as one of the top players in the world and has always made his way to a Paralympic Games in his time playing ice sledge hockey. Since the 1994 Paralympic Winter Games in Lillehammer, Norway, the Norwegians have never placed out of a medal spot, most recently winning bronze at Vancouver 2010.

If the Norwegians are unsuccessful in making it Sochi, Pedersen’s future in the sport is in question.

“I still love playing hockey,” says Pedersen. “But after Sochi I don’t know what is happening. I have a wife and two great kids back home and they are an important part of my life. We’ll see what happens.”

Growing up, Pedersen played many sports, including football and handball along with hockey.

He’s definitely always been one of the most competitive ones out on the field or ice.

“I understood early that I have talent for sports,” Pedersen said. “It’s all about being a talented at training as well.”

Leading up to the World Championships A-Pool, Pedersen said his training had been going well. It is the training and competitive nature of ice sledge hockey that keeps him motivated to continue playing.

“My motivation to continue to play is so that I can play games,and compete at top level in an arena that gives me a great kick,” Pedersen said.

Norway was only able to muster seven shots in the loss, with just one coming from Pedersen.

The Norwegians had the day off on Monday (15 April) to recuperate before they begin battle with Sweden on Tuesday (16 April). Sweden have also yet to record a victory in the tournament. That game, along with the rest of the games in the tournament, can be seen live here.

Pedersen’s success as one of the top players in the game is something that he takes in stride.

“The results you create in the next game is the most important thing, what you have done before is not exciting anymore,” Pedersen said. “I put extremely high goals for myself, and I’m always trying to improve my skills.”

With a bid for Sochi on the line, Pedersen said it’s now or never for his team is they are to avoid not going to the Paralympic Games for the first time ever.

“Now we must stay focused and believe in ourselves,” Pedersen said.

“Everything is possible, but we must fight really hard for each victory.”