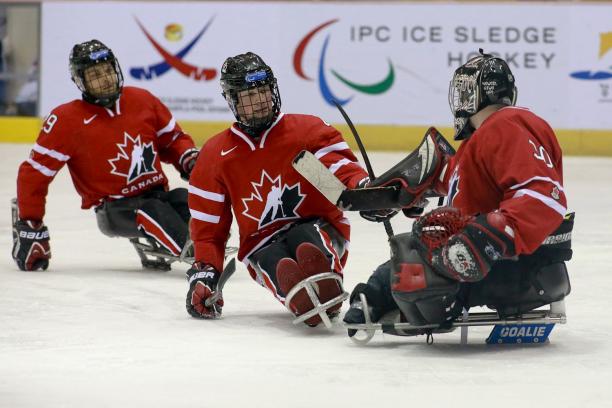 This article first appeared on Paralympic.org on May 20, 2013.

Derek Whitson is only 23, but he is already a veteran to Canada’s para-sport scene.

Whitson most recently helped Canda capture gold in Goyang, Korea at the 2013 IPC Ice Sledge Hockey World Championship A-Pool, helping his team go undefeated and beat the USA in the final on 20 April to qualify for the Sochi 2014 Paralympic Winter Games.

The former forward turned defenseman is a multi-sport athlete, though.

After capturing gold in Goyang, Whitson immediately flew back to Canada, had a quick stay in his hometown of Chatham, Ontario, and then the next day flew to Montreal, Quebec for the Defi Sportif AlterGo 2013 football 7-a-side tournament.

Whitson admitted the travel and jet lag took a bit of a toll on him.

“It was a little tough at first with the time change,” Whitson said. “It was 13 hours difference, so it was tough to get used to but I jumped right into the practices and games right away for them. I think it helped that I didn’t have much time to rest and I was able to readjust to the time nicely.”

After joining the Canadian national football team in 2005 at the age of 16, Whitson was able to participate in a pair of Paralympic Games with the 7-a-side team.

A keeper for the squad, Whitson hopes that the finish of his team in Montreal will help lead to success this summer in Barcelona, Spain, for the International Trophy of 7-a-side football.

“We’re still at the building phase with soccer, we have a long ways to go, but our goal is to make Rio in 2016,” Whitson said.

In 2007, at 18, Whitson was then successful in making the national sledge hockey team and a year later, decided to put football on hold and focus on sledge hockey.

Mike Mondin, head coach of the Canadian sledge hockey team, had high praise for his defenseman and what he brings to the team.

“He’s one of our top four defensemen and he plays in all situations and we have a lot of trust in him that he can go out there and perform with the best in the world and contribute to our success,” Mondin said.

After an injury right before this year’s World Championships in Goyang, Whitson’s tournament was in question.

Whitson was unable to get back on his sled until two weeks before the tournament.

“He was determined that he was going to be an effective player and he certainly was at the World Championships,” Mondin said of Whitson, who recorded one assist in the tournament.

With the win in Goyang, Whitson feels as though it is a great confidence boost going into Sochi 2014.

“I think that was huge, it gives us confidence and more experience going into Sochi,” Whitson said.

Winning a World Championship and having various different experiences with sledge hockey, Whitson has been able to transfer those back to his football team.

“Communication and the experiences that I’ve had with hockey, winning a World Championship, and seeing that team atmosphere, I’ve been able to bring that over to the guys in soccer and try and be a leader there,” he said.

Being from Canada, Whitson was surrounded by hockey growing up and admitted that if he had to choose between hockey and football, hockey would win every time.

“Hockey in a heartbeat,” Whitson said.