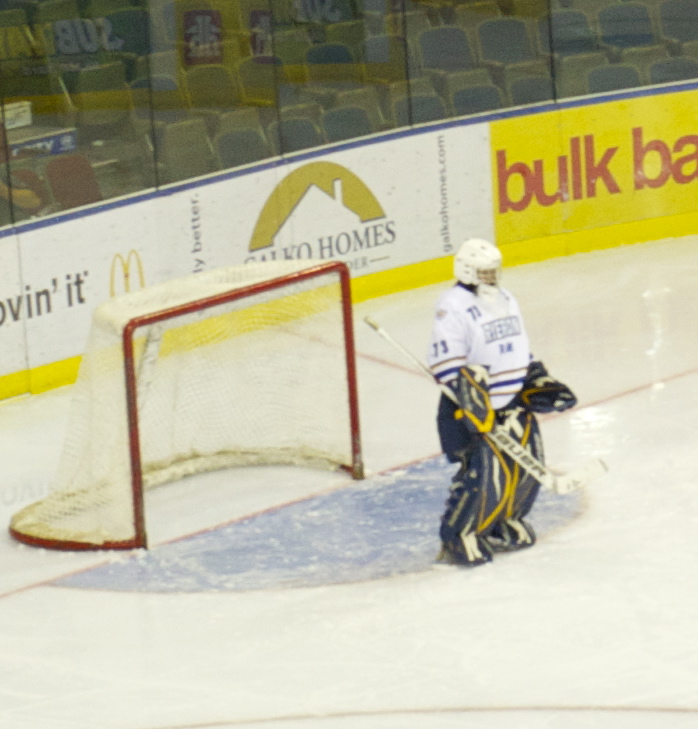 This article first appeared on RyersonRams.ca on October 11, 2013.

ST. CATHARINES, Ont. – Emma Crawley made 19 saves in the second period and that was the difference, as the Ryerson Rams picked up their first win of the season over the Brock Badgers, 2-1.

Crawley, who was making her first start of the season, stood tall as the Rams (1-2) had to kill off three penalties during the course of the second period. The Herring Cove, N.S. native ended the game with 36 saves.

The win was Crawley’s first since Oct. 15, 2011 when she shutout the Waterloo Warriors.

Luckily for Crawley and the rest of the team, Ryerson was able to put some pucks in the net as well.

Samantha Pui (Toronto) scored her first goal of the season at 7:24 of the first period from Clare Sabine (London, Ont.). The Rams’ leading goal scorer from last season, Emily Rose Galliani Pecchia (Toronto) also picked up her first goal of the year. Galliani Pecchia put the team ahead 2-0 in the second period on a short-handed goal where she battled off a Brock defender and put it past Badgers starter Julia Ouroumis.

Ouroumis made 22 saves in the loss.

Brock made things interesting in the third period. A shot from the point just over five minutes into the period was deflected in front by Erin McColm and got past Crawley, breaking the shutout bid.

– Ryerson entered Thursday night with the second worst penalty kill percentage in the CIS at 66.7 per cent. The Rams were able to kill off all four penalty kill opportunities.

– Rams captain Nella Brodett (Edmonton, Alta.) is out for at least three weeks with a sprained MCL. The injury occurred during the team’s season opener against the Toronto Varsity Blues.