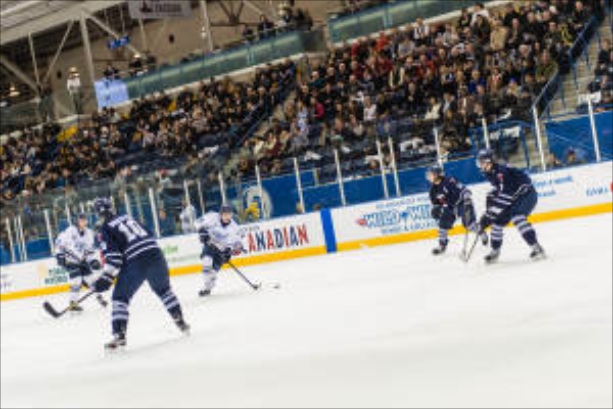 The battle of downtown Toronto is reignited on Wednesday evening as the Toronto Varsity Blues host the Ryerson Rams at 7:30 p.m.

Although the two teams have both changed divisions and now sit in the OUA West, the story between these two is much the same. Ryerson has started off the year hot, scoring 10 goals in two games. Their 2-0 start is the team’s best in over 10 years. Toronto knows a thing or two about starting a season hot. Last season, they started 4-0-1 before sliding in the standings and finishing in fifth place.

After a win against Ottawa to start their season at home, Toronto was blanked by the McGill Redmen on Saturday night.

Brett Willows, a third-year goaltender for the Varsity Blues was solid in the win against Ottawa. Willows only allowed two goals on 34 shots and is tied for sixth place in the CIS for save percentage at .941. Willows is no stranger to being at the top of the CIS in statistics either. Last season, Willows ranked third with a .930 save percentage.

Veteran forward Jeff Brown has yet to put the puck in the net in 2013-14, only notching one assist. Brown was the Varsity Blues leading goal-scorer last year with 14 goals and 18 assists, good for 32 points.

In his first full season with the Rams, Wise has come out of the gate firing, scoring two goals and five assists in the team’s opening weekend. His seven points to date ranks him tied atop the OUA scoring leaders and tied for fourth in the entire CIS. Wise, who spent time with the American Hockey League’s Rochester Americans before joining Ryerson in January, has been dynamite alongside linemates Dominic Alberga and Michael Fine. The trio combined for 10 points against Ottawa on Saturday.

Markovic is Toronto’s leading goal scorer early on this season, scoring twice against the Ottawa Gee-Gees on Friday night. Markovic is known to come up big against Ryerson, posting a season high two goals on Jan. 6 against the Rams. He will look to continue to put the puck in the net on Wednesday night.

Passingham has started the year off strong for the Rams, recording both wins so far in 2013-14. His desperation save on Friday evening in overtime against McGill led to Domenic Alberga’s game-winning breakaway goal. On Saturday, Passingham made just enough saves against Ottawa for the win. He has made the 10th most saves in the CIS to date with 61.

Willows started on Friday night against Ottawa, recording the win and making 32 saves. He handed it over to his partner Garrett Sheehan on Saturday but is expected to start Wednesday against Ryerson. Last season, Willows only played one game against Ryerson, allowing two goals but suffering a 3-1 loss on January 23.

“They (team) want to win, and they feel like they can and so I would say even though it wasn’t pretty, we competed hard for 60 minutes and got the two points in regulation.” – Head Coach Graham Wise after a 7-6 win against the Ottawa Gee-Gees on Oct. 12.