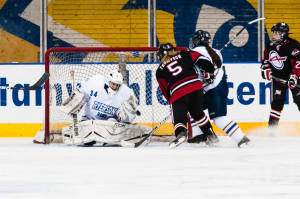 This article first appeared on RyersonRams.ca on September 22, 2013

TORONTO – Coming from down two goals, the Ryerson Rams women’s hockey team scored four unanswered to pick up its third straight win against the Carleton Ravens, 5-3.

The win was also the Rams first against a CIS opponent this season in the matinee contest at the Mattamy Athletic Centre at the Gardens on Sunday.

After a scoreless first period, Carleton came out in the second with a two-man advantage and didn’t miss their opportunity. Mackenzie Coney got the Ravens on the board just 20 seconds into the second period. Shortly after, on another two-man advantage for the Ravens, captain Tawnya Guidon scored to make it 2-0.

“I mean, we better take penalties right now instead of the regular season,” chuckled intern head coach Pierre Alain. “Fatigue may have been a part as to why we took penalties but we just worked harder and practiced our PK (penalty kill).”

The Rams had some special team magic of their own as Paulena Jakarsizien (Woodbridge, Ont.) scored halfway through the period. They were able to keep the pressure in the Carleton zone and goals from Chloe Richardson (Calgary, Alta.) and Blair Malthaner (Scarborough, Ont.) gave the Rams a 3-2 lead after two periods.

Another Malthaner goal just 44 seconds into the third period doubled the lead and gave Ryerson enough breathing room to hang on for the victory.

With the team playing three games in three days, Malthaner said that it was starting to take a toll on her team’s performance.

“We were a lot slower in speed, that’s for sure than we have been in the last two games,” said Malthaner. “We knew what we had to do, we could talk as much as we wanted in the room, but we kind of just had to go with it and do our best.”

A two-goal performance for the rookie, who describes her transition into the OUA as a smooth one, is not lost on her coach.

Cassandra McNichol (Toronto) turned away 23 shots for the win. Carleton’s Tamber Tisdale was issued the loss after allowing four goals and an empty-net goal on 22 shots.

With a power-play goal against Carleton, Alain has liked what he’s seen so far from his team’s powerplay units. He said it will be something that the team will continue to work on when they travel to Lethbridge, Alta. for a tournament next weekend.

The Rams start off the tournament on Sept. 27 against St. Thomas University. Ryerson’s next home game is their home opener on Oct. 5 at 2 p.m. at the Mattamy Athletic Centre at the Gardens.