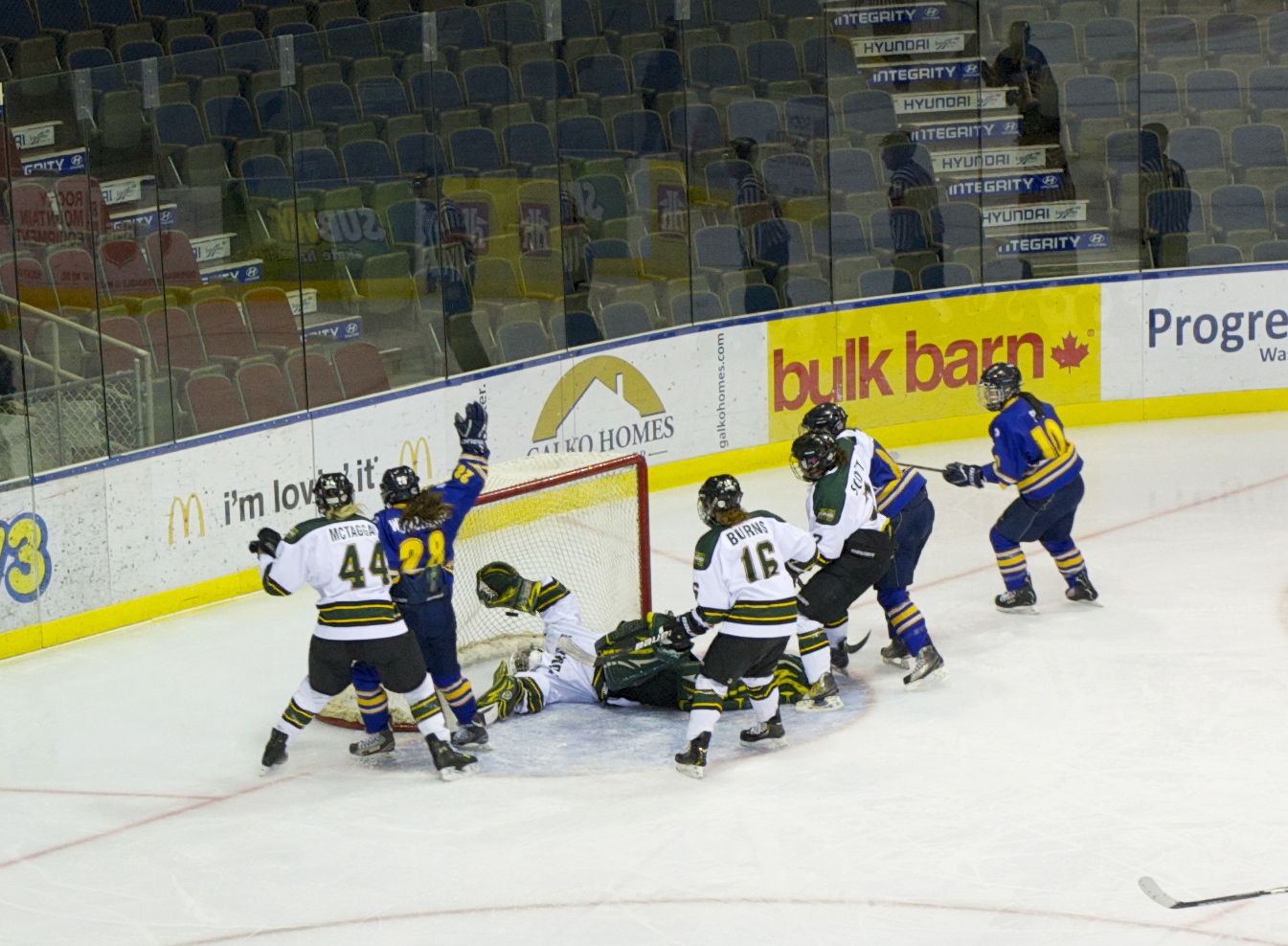 This article first appeared on RyersonRams.ca on September 28, 2013.

LETHBRIDGE, Alta. – Special teams was the difference for the St. Thomas Tommies, as they scored two powerplay goals to defeat the Ryerson Rams, 4-3 in the first game of the National Female Hockey Challenge in Lethbridge, Alta.

Katie Brewster scored on the powerplay with 2:13 remaining in the third period to put the Tommies ahead by one. Even with Rams starting goalie Alex Armstrong (Toronto) on the bench for an empty net, they were not able to even things up in the final moments of the game. The goal came after the Rams had been on the penalty kill for the better part of four minutes.

“We’ve been pressured today. The other team pressured the puck and they created these penalties,” said interim head coach, Pierre Alain. “We took penalties out of turnovers and that cost us two goals.”

The Rams had all the momentum going into the third period as well, scoring three goals in the second. Blair Malthaner (Toronto) scored on a nice wrap-around to even the game at one, seven minutes into the second period. After the Tommies’ Emily Francis answered right back, Melissa Wronzberg (Thornhill, Ont.) scored two goals just 57 seconds apart and just like that, the Rams were going into the third period with a 3-2 lead.

Only 1:38 into the third period, Teah Anderson scored for St. Thomas, who were playing just their second game of the 2013-14 season, to tie the game at three.

Ryerson heavily outshot their opponents in the matchup, getting 27 pucks on Tommies starter Kristin Wolfe. Armstrong took the loss, giving up four goals on 11 shots.

The Rams are back in action Saturday against the University of Lethbridge Pronghorns at 8 p.m. MT.

-The loss snaps a three game winning streak for the Rams, who won all three match ups last weekend on home ice.

-The Rams will start Emma Crawley (Herring Cove, NS) against the Pronghorns. Crawley last played against NAIT on Sept. 21 in a 2-1 overtime win at the Mattamy Athletic Centre at the Gardens.

-The ENMAX Centre is rumoured to be expecting a big crowd in the Rams Saturday night matchup against the University of Lethbridge. Approximately 800-1000 fans are expected to attend the game.