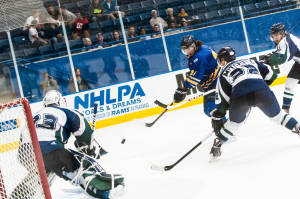 This article first appeared on RyersonRams.ca on October 4, 2013.

TORONTO – Four unanswered goals in the second period was the difference, as the Ryerson Rams defeated the Nipissing Lakers, 4-3 on Friday night.

The pre-season matchup was a part of the Alumni Weekend festivities at the Mattamy Athletic Centre at the Gardens.

“Good pass on the first one by Vis (Robert Visca), and I just kind of closed my eyes and shot it and Kelly just sort of threw it up the middle and I went for it,” said Gallant describing his two goals.

The win improves the Rams pre-season record to 2-4 and also snaps a two-game losing streak.

“I was happy with the way we performed,” said head coach Graham Wise. “Even though we came out of the first period down 2-0, I thought we had a decisive advantage in shots. We just got to get the monkey off our back for slow starts. Our goal in the third was defence first and I think we did a good job doing it and I thought we did a good job of killing penalties as well.”

Ryerson started out the matchup by piling a ton of shots on Nipissing starter Kirk Rafuse, 25 in total, but weren’t able to solve him. Gallant credits the four goal second period to the fact that the Rams tired out the visiting goaltender.

“After we got the first one, we kind of dropped his confidence a bit. The second one was quick, the third one was quick and they were all within a short period of time. It’s tough for a goaltender to bounce back from four quick ones,” said Gallant.

Troy Passingham got the win in net for Ryerson. He was solid in the contest, stopping 32 shots, 16 in the third period.

The Rams and Lakers will do battle again tomorrow night in Huntsville, Ont. at the Canada Summit Arena at 5:30 p.m.

For Wise, closing out the pre-season on a positive note is a key.

“Playing in an Olympic rink we better get up to speed against Nipissing and carry it into the week and into our first league game.”

-The Ryerson Rams men’s hockey team start their regular season next Friday, Oct. 11 against the McGill Redmen. Game time is 7:30 p.m. at the Mattamy Athletic Centre at the Gardens.

-Head Coach Graham Wise said that he would be changing his roster up tomorrow evening in Huntsville, Ont. vs. Nipissing in hopes to get a better look at some of his players.