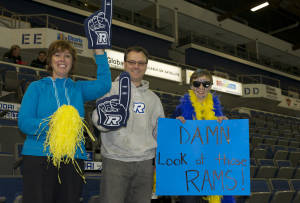 This blog first appeared on RyersonRams.ca on September 26, 2013.

Ryan McKenna, journalism student and writer/broadcaster for the Ryerson Rams Network, is travelling with the women’s hockey team on its trip to the National Female Hockey Challenge, hosted by the University of Lethbridge. He will be blogging from Lethbridge.

Home sweet home. The Ryerson Rams are back on home soil after a very long day of travel once again on Sunday. After a slideshow of their trip to date showing flawless pictures of team members, the team departed for the rink for a matchup against Mount Royal University Cougars from Calgary, and it was a thriller!

The game went to a shootout where there were goals galore. The Rams scored on four of out five shots while Emma Crawley made the biggest save of them all to record the win. It was great to wrap up the National Female Hockey Challenge tournament with a win, especially in dramatic fashion.
The team quickly loaded the bus and arrived at the Calgary airport just after four o’clock. After security, the team has some supper and were on their way back to Toronto. Upon arriving in Toronto at 12:30 a.m., the team had to wait for their bus to come pick them up. The Rams got back to the Mattamy Athletic Centre at the Gardens at 3 a.m. A long day, but a great trip. Thank you for having me along for the ride!

After a 9 a.m. breakfast at the hotel, the team held a meeting at 11 a.m. to discuss leadership on the team. The Rams are in the process of picking captains for the upcoming season, and this activity was meant to help build team chemistry. Players were grouped together in teams and were able to voice their opinions on leadership qualities and what they want to see in their leader.

The team was dismissed for lunch at noon and had three hours of free time. Some players stayed back at the hotel and worked on homework while others used their time to go to the mall. Rams goalie Cassandra McNichol and forward Melissa Wronzberg spent some time at an arcade playing air hockey.

After an hour of nap time from 3 p.m. until 4 p.m. the players were driven to the rink where they had a pre-game meal prepared for them. At 6 p.m., interim head coach Pierre Alain and coaching staff brought out a mini soccer ball and went over strategy on the concourse of the ENMAX Centre before their game against the Univeristy of Lethbridge Pronghorns.

Before game time, assistant coach Michelle Janus talked to potential recruits in the rink’s lounge area, where a meet and greet between universities and Midget hockey players was taking place.

The Rams were greeted with a familiar face at the game. Head coach Lisa Haley, who is in Calgary working with the Team Canada senior national team preparing for the Sochi 2014 Olympics, came to see them play.

Although the team lost 4-1 to a strong and physical Pronghorns team, they battled hard. A quick turnaround for the Rams as they play the Mount Royal University Cougars at 11:30 a.m. MT on Sunday before hopping on a bus to the Calgary airport for a flight back to Toronto. Sunday will be a busy day, let’s see if the Rams can end the tournament on a positive note.

Traveling can be fun for any hockey team, but at the end of the day, all the players and coaching staff know that there are games to be played and contests to win. The Rams women’s hockey team played their first game of the National Female Hockey Challenge against the St. Thomas Tommies Friday evening, falling 4-3.

The team had a rough first period, struggling to find a groove after 16 plus hours traveling yesterday. Overall, it was a great hockey game with both team’s being evenly matched. For the Rams, this is their third weekend straight playing three games in a row, and as for St. Thomas, that was just their second game of the 2013-14 season.

Earlier in the day, the team had a breakfast at 10 a.m. followed by a workout in the parking lot of the hotel. The wind caught a few players by surprise as everyone found it a bit more chilly than the normal air in Toronto. Interim head coach, Pierre Alain, worked on different strategies that he wants his team to have and work on.

The Rams left for the ENMAX Centre just before 2 p.m. where they had some tacos awaiting them. Prior to the game, video coach Francis Lavoie and Alain spoke to the team about some of the situations that they liked, and didn’t like from last weekend’s games at the Mattamy Athletic Centre at the Gardens.

The team will have lots of time to rest up and be prepared for tomorrow. They don’t play until 8 p.m. MT against the University of Lethbridge Pronghorns. See you Saturday!

It was a travel day for the Ryerson Rams women’s hockey team, as they travelled to Lethbridge, Alta. for a tournament hosted by the University of Lethbridge. The day started at 9:45 a.m. as players packed their gear onto a bus headed towards Pearson International Airport. Arriving shortly before 11 a.m., the team checked in at terminal one and were greeted by Asian tourists who were given Rams foam fingers and even performed a dance of PSY’s Gangnam Style.

After eating Subway for lunch, the team headed through security and just caught the final boarding call for the flight to Calgary. That didn’t matter though, as the plane needed maintenance and the team was stuck on the plane for two hours before taking off. Four hours after that, the team arrived into Calgary at just after 6 p.m. local time. They were greeted by Rams forward, Chloe Richardson’s (Calgary, Alta.) mother who gave her daughter a big hug. Definitely one of the highlight’s for the girls on the team.

The team then proceeded to hop on a bus en route to Lethbridge, which took about two and a half hours. The bus ride featured lots of singing, especially from the rookies as they performed some popular…and not so popular songs in front of the bus. Just after 9 p.m. MT we dropped the gear off at the arena (ENMAX Centre, home of the Lethbridge Huricanes of the Western Hockey League). The team dropped their luggage off at the hotel and then went to Boston Pizza for a very late supper. Big first game tomorrow against St. Thomas. The team breakfast has been pushed back until 10 a.m. MT.