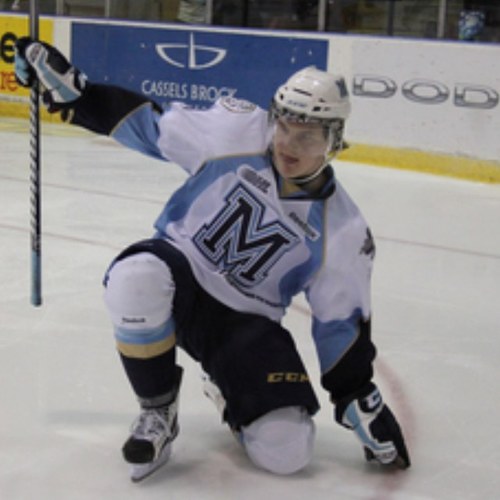 In a spirited battle on Sunday at the Mattamy Athletic Centre at the Gardens, the Ryerson Rams men’s hockey team defeated downtown rivals, the Toronto Varsity Blues, 6-4.

This blog does not represent the views of Ryerson University or the Ryerson Rams.

Making his home debut on Mattamy Home Ice, Wise, a new recruit for the Rams (6-12) and son of head coach Graham Wise was a dominant force in the Rams win over the Blues.  Wise scored twice and line mate Dustin Alcock chipped in with one goal and three assists to lead the Rams past the Blues (10-5-3).

It didn’t start out so well for the Rams, as halfway through the second period of play, they trailed Toronto 3-1.  Those first three goals are thanks to the not so spectacular play in net by goaltender Troy Passingham, who was making his eight start of the season.  The first goal by the Varsity Blues caught Passingham looking like a fish in his crease, way out of position, and it was an easy one at the back of the net for Toronto’s Lane Werbowski.  The second goal let in, I will give him the benefit of the doubt, but the third one made me laugh and shake my head in disbelief.  A little flick shot from in close that should have been covered up, but wasn’t, put Toronto up 3-1.  That third goal was a good example of what you can’t have from a goalie if you’re looking to make a playoff run.

After that third goal the Rams sort of woke up, a sick feed by Alcock over to Wise, who was still skating backwards, wired one top shelf on Toronto starter Garrett Sheehan.  After seeing that shot, it made me realize exactly why Wise put up 31 goals with the Mississauga St. Michael’s Majors of the Ontario Hockey League (OHL) last season.

After Wise’s goal it was all Ryerson, four more goals followed suit, including Wise’s second of the night and two goals from a pair of defenceman, Mark Corbett and Dean Wilmott.  The Ryerson scoring was capped off by Alcock, on the power-play from Andrew Buck and Michael Fine.

The main storyline for the game was the physicality and how it impacted the game.  In total, there were 88 penalty minutes assessed and a lot of dirty hits by the Varsity Blues.  A knee-on-knee hit by Toronto’s Kyle Ventura (who sits second on team scoring with 19 points) on Ryerson’s Jamie Haines in the first period seemed to set the tone for the entire game.  After that, it was big hit after big hit, and injury after injury for both sides.  These two teams don’t like each other, and that showed after the game with Jason Kelly needing to be escorted off the ice by Graham Wise and neither team shook hands.  These two teams do meet again in a couple of weeks on Jan. 23 at the Mattamy Athletic Centre at the Gardens.  I’m looking forward to watching that one first hand.

My final thought on the game.  The Rams need to do a better job on the penalty kill.  Three power play goals against have them at the second worst penalty kill percentage in the country at 75.6 per cent.

The win and a Concordia loss give the Rams sole possession of eighth place in the OUA East, now let’s see if there is any consistency and they string together some wins.